According to the World Health Organization (WHO), substance abuse is when a person uses psychoactive drugs in a way that could harm them. The word psychoactive means it affects the mind. Hence, those with a substance use disorder suffer from issues with a physical dependence and a psychological dependence.

Both the mind and body lash out without the “feel-good” chemicals drugs and alcohol provide. Addiction is a serious medical condition that won’t get better without treatment. There is a bit of an overlap when it comes to physical vs psychological dependence. But they are inherently different.

Substance use disorders are complex. It’s so much more than overcoming the physical sensation of withdrawal. Understanding the mental and psychical aspects behind it can help explain why it’s a complicated disorder.

What is Physical Dependence?

For example, a severe alcohol addiction may result in tremors. People can see when a person with an alcohol use disorder is suffering from tremors without them saying anything. Physical symptoms can typically be observed. Though, pain is also a symptom of physical dependence. While others can’t observe it per se, a person suffering from it can feel the sensation.

The Science Behind a Physical Dependence

Tolerance makes this issue worse. The longer a person regularly uses a substance, the more likely they will build up a tolerance to it. Once this happens, they will need more of it to feel like how they did when they first started using it. This makes physical symptoms worse when they try to stop using it.

Signs and Symptoms of a Physical Dependence 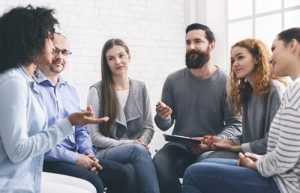 What is Psychological Dependence?

A psychological dependence affects the mind negatively in terms of mood, feelings, and thoughts. They’re arguably more difficult to pin down and treat because of this. A doctor can tell when a person has tremors or is sweating excessively. It’s less likely they can tell if a person suffering from a substance use disorder feels sad every single day.

A patient’s appearance can indicate this; they might look disheveled and smell. However, not every person with a psychological disorder looks like they have one. So, self-reports help medical professionals at addiction treatment facilities diagnose a psychological dependence. The downside is that these reports may not always be accurate. Despite this, chemical dependence must be treated as a whole for it to work.

The Science Behind a Psychological Dependence

Much like a physical dependence, a psychological dependence happens because of using drugs or alcohol habitually. To reiterate, people can develop a chemical dependency through legally prescribed medication. Some drugs, illegal and legal, are more addictive because they target pleasure and reward-seeking neurotransmitters.

Some of these chemicals include:

Each of these chemicals has a positive effect on a person’s body and mind. Yet, it does this by forcibly speeding up or slowing down the body’s systems. The mind craves these chemicals and reacts negatively when they’re suddenly gone.

This can happen immediately or manifest weeks to years later. When dependence turns into addiction it’s a condition that must be monitored for life. Considering that half of the people with a substance use disorder suffer from a mental illness, it’s likely symptoms of psychological dependence will emerge over time.

Signs and Symptoms of a Psychological Dependence 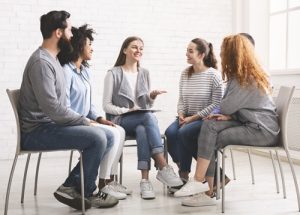 To put it another way, physical vs psychological dependence means mental vs physical symptoms. Also, a program at an addiction recovery center will deal with them separately. Different medications are used to treat each respectively.

That’s not to say a patient won’t have a personalized plan that takes both into account. But, a detox center will probably focus more on physical symptoms than mental ones. Addiction treatment usually focuses on the psychological aspect of addiction and the dependency that comes with it. Mental and physical symptoms of chemical dependency are dangerous. Either can result in death without a medical intervention. Why It’s Difficult To Differentiate Physical vs Psychological Dependence

The signs and symptoms of a physical and psychological dependency are difficult to separate at times. Psychological illness can result in physical symptoms. Depression and anxiety can cause an individual to have heart palpitations, feel pain, and make them faint. Physical symptoms can make a person lose sleep, feel depressed, and feel anxious. One might lead to another, which is why it’s important to treat both as they appear.

People can develop a dependence without an addiction. Dependence isn’t necessarily an addiction because drugs can improve a person’s life. For instance, people with anxiety disorders may be prescribed Xanax by a doctor. Their disorder makes it difficult for them to function in real life. Xanax mitigates the worst of their symptoms.

However, if this person takes it for several years they’ll likely develop a physical and psychological dependence. They might experience withdrawal symptoms if they tried to stop. Also, their tolerance may go up, which means they’ll need a higher dose. Regardless, this drug allows them to live life more normally. On the other hand, addiction is when a person uses substances, like drugs and alcohol, despite the harmful consequences.

Programs With a Focus On Physical Dependence

Detox is usually the first program in an addiction treatment center. Recovering addicts will stop or taper off the substance they are addicted to. This removes any traces of it from their body and the build-up of toxins in the process. The medication they’re prescribed in some cases mitigates the physical symptoms of withdrawal.

While detox is comprehensive, it focuses more on physical dependence. It lasts anywhere from a few days to a week. Although, it may last longer depending upon the severity of the addiction. Patients in a detox program will be under medical supervision 24/7. A physical dependence can result in life-threatening symptoms. Medical supervision allows patients to withdraw in a safe setting.

A full-service rehabilitation center has programs that will help patients overcome the psychological symptoms of withdrawal. Treatment without detox beforehand can be much less effective.

Programs With a Focus on Psychological Dependence 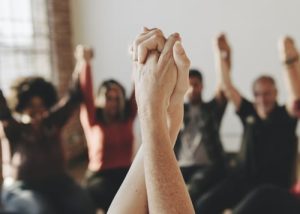 Treatment deals with the symptoms of a psychological dependence. They can reduce the symptoms of mental illness or issues associated with it. Medication-assisted treatment may be provided to patients to alleviate the worst of it. Therapy is at the heart of treating the mental symptoms that come with a chemical dependency.

North Jersey Recovery Center offers multiple forms of therapy. One may be suited more for one patient more than another. Cognitive-behavioral therapy (CBT) and dialectical behavior therapy (DBT) are offered in many addiction treatment centers. They may be conducted in a group or individual setting at times. Each can complement a sober living program.

The origin of CBT is that a professor and psychologist realized that subconscious thoughts could deeply affect mental health. For instance, every person has “automatic” thoughts that arise in response to a situation. Often, people are unaware of these thoughts even though they can result in a mental illness.

CBT seeks to stop these destructive thoughts before they happen. It allows patients to acknowledge that they exist, why they happen and actively try to change them. A therapist who specializes in CBT may ask a recovering addict to track the thoughts that happen when they want to use drugs and alcohol. They can use these patterns to help them move forward in the process of recovery.

DBT works well for certain mental illnesses more than CBT. A person’s mental illness may get worse as a result of psychological chemical dependency. People with a borderline personality disorder might have a tendency to self-harm. DBT might be better over CBT because it recognizes that these thoughts and feelings may never go away completely. Yet, it gives people the tools to change their behavior in spite of how they think and feel.

North Jersey Recovery Center believes that addiction is a disorder that affects both the body and mind. Treating physical dependence without psychological dependence is ineffective. We create personalized plans for each individual who enters our facility to give them the tools for long-lasting recovery.

We teach patients why a physical vs psychological dependence matters and how to deal with both positively. Contact us now to see how we can help you or a loved one overcome chemical dependency.