According to the 2019 National Survey on Drug Use and Health (NSDUH), 14.1 million adults ages 18 and older had an alcohol use disorder. That’s over 5% of American adults. Alcohol use disorder, or alcoholism, is a serious chronic medical condition.

Scientists and doctors look for treatment options because of a desperate need to alleviate this national epidemic. Traditional methods have gained peer-reviewed recognition. Yet, alternative treatment as a whole is a less explored science that is gaining popularity.

One of these methods uses hypnosis to stop drinking. Although hypnosis is an unconventional mode of treatment, many individuals suffering from alcoholism have benefited from it. As a result, it’s gained a renewed interest within the medical and scientific community. As more research emerges, the more it may be used across alcohol addiction treatment facilities overall.

What Is an Alcohol Addiction?

The DSM-5 defines each classification of alcohol use disorder on the following criteria:

Alcohol abuse is drinking in a way that can harm oneself and those around them. Alcohol dependence is a physical and psychological necessity to drink. Since alcohol is addictive, it makes the body and mind react negatively when a person with an alcohol use disorder stops drinking.

People can abuse alcohol without having an alcohol addiction. Though, without proper treatment and intervention, it can quickly develop into a severe alcohol use disorder. This in itself can lead to costly treatment and worse—death. Approximately 95,000 Americans die from alcohol-related causes each year.

The Science Behind Alcoholism

Alcohol is a central nervous system (CNS) depressant. This means it slows down the body’s systems. Alcohol’s relationship with the brain chemical, or neurotransmitter, gamma-aminobutyric acid (GABA) is largely responsible for how people develop an addiction to alcohol.

GABA is an inhibitory neurotransmitter. This means that it plays a role in chemical messages and whether or not that message will produce an action potential. GABA helps regulate the action potential, which sends a pulse down the brain’s axon.

GABA plays the following roles in the body: 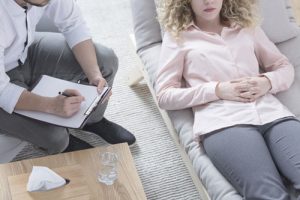 Excessive drinking causes an influx of GABA. It’s because alcohol mimics GABA and is able to bind to its receptors. This produces the same psychological effect as GABA and leaves more of it in the brain to use. Alcohol also inhibits glutamine, another neurotransmitter. GABA reduces brain activity by slowing down messages; glutamine speeds it up.

Normally, the brain does this harmoniously. Yet, alcohol puts both levels out of balance. Plus, it releases chemicals, like dopamine, in the process. Dopamine is a powerful chemical that triggers the pleasure sensation associated with rewards. Even drinking a little causes this.

So, the combination of increased pleasure and decreased brain functionality makes it addictive. Over time the body and brain get used to these levels. As a result, it becomes less pleasurable to drink but is necessary for someone struggling with alcoholism to feel normal. They will need to consume much more alcohol to feel as they did before.

Signs and Symptoms of Alcoholism

The signs and symptoms of an alcohol use disorder can mimic mental health disorders or the product of a rough time. However, it’s important to be aware of the signs and symptoms to look into hypnosis for drinking or other forms of treatment. It’s easier to overcome alcoholism in its early stages, and much harder when it’s left untreated.

The DSM-5 uses these questions to evaluate whether or not someone has an alcohol addiction:

Hypnosis is more than a man with a European accent swinging a clock back and forth. It’s a complex practice that has shown promising results within the addiction treatment community. Two studies cited in the journal, Hypnosis for Addiction, had positive results. One study employed treatment without hypnosis therapy while the other one did. Combining hypnosis with other therapeutic techniques showed greater improvement than without it.

The APA writes that past controversy has cast a shadow on the power behind hypnotism. It can help with pain, changing habits, and improve anxiety as well as mood disorders. The positive results make it a powerful tool against alcoholism.

Using Hypnosis To Stop Drinking: How Does it Work?

The science behind hypnosis to stop drinking isn’t fully understood. Certified hypnotists, many of whom are psychiatric professionals, are able to perform it and make it work. Yet, it’s unclear how it works exactly.

What the medical community understands is that hypnosis brings thoughts, memories, and emotions to the forefront through deepened relaxation. This helps identify emotions and memories that were hidden. Also, the heightened state of concentration and relaxation makes suggestions more likely to happen.

There are three elements in hypnotism that explain the science behind it:

The Cons of Using Hypnosis To Stop Drinking Problems

Unfortunately, not everyone can be hypnotized, according to research conducted by Stanford University School of Medicine. A senior author of the study, Dr. David Spiegel, stated that there was no specific behavioral trait that makes someone “hypnotizable”. Instead, it has to do with a person’s neural traits.

For instance, the researchers looked at three unique neural networks in 24 participants, 12 highly hypnotizable and 12 who could not be. The people who were highly hypnotizable had increased connectivity between the neural system that makes decisions and decides the order of importance between them. The science is interesting, but the fact remains that hypnosis to stop drinking isn’t doable for everyone.

Also, another fact is that alternative therapies like this aren’t as explored or understood as other forms of treatment. Modern therapy is the product of hundreds of peer-reviews and decades of tweaking. However, with time, using hypnosis to stop drinking may be on par.

The world can be a tough place to live in. It’s easier to cope with struggles through drugs and alcohol—but only temporarily. Luckily, alternative therapy, like hypnosis to stop drinking, presents cutting-edge evidence that people can get over alcoholism through the power of the mind.

North Jersey Recovery Centers offers cutting-edge addiction treatment through our inpatient and outpatient programs. We’re constantly ahead of the game because we’re open to new and developing therapies. We use a combination of traditional and holistic methods to help our patients overcome addiction. If you or a loved one struggles with alcoholism, contact us to see how our facility is the best option to overcome it.