Due to its popularity, many people have wondered over the years, “how long does cocaine stay in your system?” This might be because they need to pass a drug test or even so they know how long the effects will last. While there is no sure-fire way to determine the exact amount of time cocaine stays in a person’s system, some factors can help give a better idea as far as a timeframe goes. Here are some factors that can help determine how long cocaine can stay in a person’s system.

How Long Does it Take for Cocaine to Kick In?

Before being able to determine how long cocaine stays in the system, it’s important to know how long it takes to feel the desired effects after taking the substance. Depending on how cocaine is ingested plays a major factor in how quickly it takes effect.

Cocaine by design is a fast-acting stimulant that attaches to the central nervous system to produce an intense, but short-lived high. Depending on a variety of factors, the “high” can last anywhere from a few minutes to a few hours. It can be ingested in a variety of different ways, each resulting in a different effect. The most common ways of ingestion include:

How Long Does Cocaine Stay In Your System?

When it comes to detecting cocaine in a person’s system the timeline can vary from a few hours to a few days or even a few weeks depending on a variety of factors. A big reason why cocaine is so popular recreationally is that it is believed that it does not stay in a person’s system for very long, unlike other drugs that produce similar results. That’s not always the case, though.

Depending on how a person ingests it and how it is tested for, cocaine can remain in the system for weeks or even months. Let’s take a look at the most common ways cocaine is screened and how long it will continue to be detected for each.

How Long Does Cocaine Stay in Your Urine?

On average, cocaine can be detected in urine for up to 3 days after it was last used. However, for someone that uses cocaine regularly, it can continue to be detected in their urine for as long as 2 weeks after it was last used. Urine is by far the most popular method of drug screening. When it comes to screening for cocaine, it is also by far the most accurate.

How Long Does Cocaine Stay in Your Hair?

Depending on how it was ingested, cocaine metabolites can be found in a person’s hair follicles for as long as 3 months in some cases. When it comes to drug detection, most people think of urine, blood, or even saliva. The one that gets forgotten about the most is hair.

How Long Does Cocaine Stay in Your Saliva?

When it comes to saliva, cocaine can be detected for up to 2 days after it has been used last. Testing for cocaine through the use of saliva involves a special device that is used to extract saliva from the mouth and put it into a tube for testing.

How Long Does Cocaine Stay in Your Blood?

Cocaine tends to be detectable for up to 12 hours after last use. Blood tests are typically only done in a hospital-type setting. Factors That Can Determine How Long Cocaine Stays in the System

Here are some of the most common factors that can help in determining how long cocaine can stay in the system for as well a how long it is detectable. 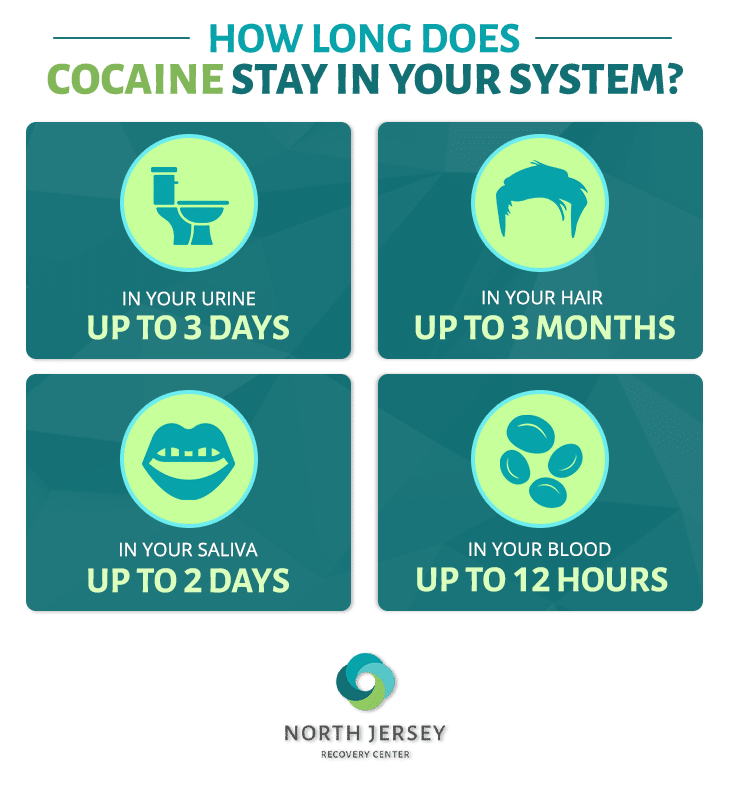 Benzoylecgonine is a metabolite of cocaine that can be detected in the body for a longer period of time than the cocaine itself. This metabolite is typically stored in fatty tissue. As a result, those with higher levels of body fat tend to have cocaine stay in their system and be detectable longer than those with less body fat.

The Amount of Cocaine Taken and its Potency

Just like with any other drug or substance, the more you take it, the longer it is going to remain in your system. Additionally, the more potent or pure the cocaine is can play a factor in how long it stays in the system as well.

When you are properly hydrated or are drinking plenty of water, it can help flush out your system and speed up the time in which the cocaine metabolites leave the body. On the contrary, someone who is dehydrated will have those metabolites in their system for a longer period of time.

The way in which you ingest cocaine plays a major role in how long it will remain in the system, Typically, the faster the cocaine gets into the system, the shorter it stays in the system. Therefore, ingesting cocaine via either smoking it or injecting it will result in it leaving the body faster than if you were to snort it or ingest it orally.

Mixing It With Other Substances

Getting Help For Cocaine Abuse and Addiction 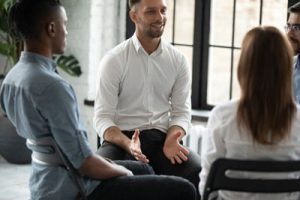 While there are many “tricks” out there to get cocaine out of your system faster, the only guaranteed way to do it is to stop taking it and allow your body to eliminate it naturally. In some cases, drinking a lot of water to flush it out can be effective, however, it has not been proven to work from a scientific standpoint.

Many times, individuals who suffer from substance use disorders feel apprehensive about seeking treatment for addiction. Due to the stigma that surrounds this matter, people may not get the help they need. If you feel embarrassed or afraid to admit you have a problem, remember that you are not alone. North Jersey Recovery Center specializes in substance abuse issues, including cocaine addiction. We are here to get people the help that they need.

Getting Treatment for Cocaine Abuse and Addiction

It can be tricky to determine just how long cocaine stays in the system. A lot of things factor into that including frequency, potency, and even the way in which you ingest the cocaine. Prolonged cocaine use and abuse can be incredibly dangerous and even life-threatening in some cases.

If you or someone you know is suffering from a cocaine addiction and could benefit from treatment, we are here to help. At North Jersey Recovery Center, it is our goal to treat every person that walks through our doors. We are proud to offer a variety of treatment options for all sorts of addictions and dependencies, including cocaine. Contact us today to learn more about our treatment options and how we can help you get on the road to recovery so you can live a happy, healthy, and sober life.