While it is the norm for doctors to prescribe certain medications for patients, some of the most addictive pills are the ones prescribed to you. The science behind this prescription drug addiction is mainly because our brains can get a type of ‘high’ from the drugs. This causes us to want to keep using the drug, even if it will cause us harm.

It is important to be aware of these drugs and the negative effects they can have on you and your family if taken without caution. The level of addictiveness varies between each of these prescription pills, while some might be minor, others can become a necessity to our wellbeing.

Addiction is a serious issue that affects millions of Americans every day, and it’s important to know when you or a loved one needs help. North Jersey Recovery is here to provide a variety of inpatient and outpatient treatments for you or a loved one.

Vicodin is commonly used to relieve a spectrum of pain (moderate to severe). The drug itself is a combination of an opioid pain reliever and a non-opioid pain reliever. Vicodin uses these two elements to ultimately change how your body reacts and feels to the pain. It is one of the most addictive pills out there today because of the user’s dependency on the drug.

This sort of relationship with the pills often leads to withdrawals when you are not actively using them. This is one of the primary reasons that many get addicted to it and end up misusing the drug. It can be extremely hard to quit drug use when a person has become dependent on a drug.

As commonly seen with many prescription drugs, Vicodin has a multitude of side effects that come with using it. Each of the side effects varies in intensity and are usually telling signs of addiction or misuse. The symptoms of Vicodin abuse include the following:

One of the strongest effects that Vicodin has when it comes to drug addiction is its intense withdrawal symptoms. Usually, the user will struggle with dependency on the drug once they have stopped taking it. This can lead to strong urges and eventually lead you down the road of addiction.

The withdrawal symptoms of Vicodin can be very painful, so it is important to get treated by professionals. A full detox program is recommended. Two widely used medications that can ease Vicodin withdrawals are buprenorphine and naltrexone. Both medications seek to reduce cravings and overall make the treatment process easier for the patient.

Xanax is a drug that is predominantly prescribed for those with a generalized anxiety disorder (also known as GAD), insomnia, and panic disorders as well. It stands as the most prescribed psychiatric drug in the United States.

Xanax is categorized as a benzodiazepine, which means that these drugs are for mental disorders. They can be used for a variety of different disorders such as anxiety, seizures (epileptic), and panic attacks. These are some of the most addictive pills on the market, and mirror withdrawal symptoms very similar to alcohol addiction.

Xanax addiction often occurs because of the user’s tolerance for the drug. As you continue to take Xanax, your body starts to become adjusted to it, and eventually, you begin to take higher doses as time goes on. Additionally, if you stop taking Xanax, your body will experience a variety of withdrawal symptoms that range in severity, which can lead to a strong dependence on Xanax.

Xanax is usually only prescribed for a short period of time because of its highly addictive nature, but this doesn’t always deter addiction. The user can become addicted to Xanax and not even know it. Some signs of Xanax addiction include:

When the user attempts to fight their addiction, it is highly recommended that they seek medical supervision when doing so. It is recommended to forgo a medical detox, followed by professional treatment through inpatient and outpatient programs. North Jersey Recovery Center, specializes in several different drug treatments.

Similar to Vicodin, OxyContin is a pain reliever that changes how your body reacts to long-running and differing levels of pain (ranging from moderate to severe). OxyContin directly affects the body’s central nervous system (CNS). The technical term for the prescription drug is oxycodone.

The feeling and impact of OxyContin on the body have been compared to that of heroin (sometimes called “Hillybilly Heroin”). It provides a sedative and euphoric effect that can become highly addictive if taken continuously. In some instances, OxyContin is used for an extended period of time, which can cause dependency and withdrawal symptoms when the user stops using.

While it is intended to be consumed through the mouth as a tablet, there is a certain high the user gets if they snort, inject or crush OxyContin. This misuse of this prescription drug can lead to a deep hole of addiction and dependence on OxyContin. Some of these symptoms (caused by OxyContin misuse) include:

As alarming as it is, there are many reports of children and teens (some as young as 12-years of age) that have abused oxycontin. Abuse of oxycontin has continued to rise over the years, misuse rose a staggering 152% between the years of 2004 and 2008. It continues to be one of the most addictive pills on the market today.

Getting treatment for an OxyContin addiction is an uphill battle, but many outlets are available and willing to get you and your loved ones through the tough journey. Some of the more popular and effective methods include addict meetings, counseling, and group therapy. If you or your loved one is addicted to any of these drugs, seek medical attention immediately.

Amphetamines are commonly prescribed for patients with attention deficit hyperactivity disorder (commonly known as ADHD) as well as those with narcolepsy. Amphetamines work to increase communication between the brain and the body. Similar to some of the other drugs mentioned, Amphetamines cause a euphoric state within the patient, this ‘high’ can be heightened when the drug is abused.

You may have heard the name before, particularly as a suffix to methamphetamine (or meth for short). Meth is a much more powerful drug that is similar in structure to amphetamine. When regular amphetamines are abused, they can become some of the most addictive pills and can become problematic in the long-run. 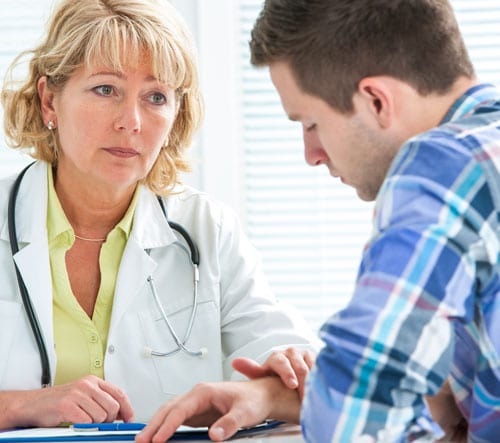 If amphetamines are crushed and snorted or injected, the user will experience a more powerful and sharper high. This kind of abuse can lead to severe addiction and withdrawal symptoms. A few clear signs of abuse might include the following symptoms:

With frequent use of amphetamines, the body actually begins to change along with how your brain acts. This eventually leads to one’s dependency on the drug for pleasure, which comes with the above-mentioned symptoms and other more intense withdrawal symptoms.

While the effects of abusing and using amphetamine can be a tough challenge to overcome, it is not impossible. There are several different therapy options that can get you and your loved ones back on track. Some of the options include behavioral therapy, family counseling, and addiction education. If you or a loved one is addicted, we are here to help at a moment’s notice, be sure to check out our treatment options and see which one best suits you.

Demerol is a highly addictive prescription opioid that is tough to get off, even if you follow your doctor’s instructions exactly. Demerol is a drug that is given for pain relief (from moderate to severe). The prescription drug tends to cause severe withdrawal symptoms when the user stops taking it.

This sort of addiction begins with strong tolerance to the drug, one that can lead to increased doses; many people don’t even realize they’re addicted until it’s too late. The strong withdrawal symptoms only fuel the addiction further – these withdrawal symptoms include chills, suicidal thoughts, anxiety, and fever. Demerol is one of the most addictive pills out there today.

The following symptoms are clear indicators of Demerol addiction/misuse:

Demerol addiction can be treated through medical detox, followed by multiple inpatient/outpatient options such as therapy and counseling for the user. Similar to all the addictive pills mentioned before, the road to recovery may be tough, but it is a necessary journey in the end.

When symptoms of addiction begin to surface it is important to act smartly and in a timely manner. Some of these prescribed drugs can end up being some of the most addictive pills. Addiction can happen to anyone but luckily, you are not alone.  It’s important to seek help from professionals who care and are ready to help. If you or a loved one is struggling with addiction please contact us today!